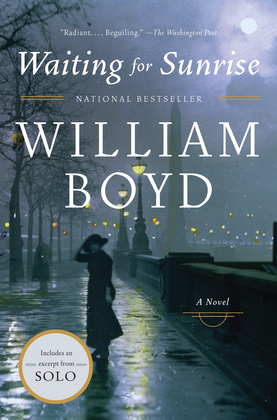 From one of our most celebrated and imaginative writers comes a spellbinding novel about deception, betrayal, psychoanalysis, and the mysteries of the human heart. William Boyd follows his critically acclaimed novels A Good Man in Africa, Brazzaville Beach, and Ordinary Thunderstorms with a razor-sharp, incandescent thriller in Waiting for Sunrise.Vienna, 1913. Lysander Rief, a young English actor in town seeking psychotherapy for a troubling ailment, becomes caught up in a feverish affair with a beautiful, enigmatic woman. When she goes to the police to press charges of rape, however, he is mystified, and his few months of passion come to an abrupt end. Only a carefully plotted escape-with the help of two mysterious British diplomats-saves him from trial. But the frenzied getaway sets off a chain of events that steadily dismantles Lysander’s life as he knows it. He returns to London hoping to win back his one-time fiancée and banish from memory his traumatic ordeals abroad, but Vienna haunts him at every turn. The men who helped coordinate his escape recruit him to carry out the brutal murder of a complete stranger. His lover from Vienna shows up nonchalantly at a party, ready to resume their liaison. And before he knows where his new life has taken him, Lysander soon finds himself on the trail of a traitor-a man whose bizarre connection to his own family proves a cruel twist of fate A provocative exploration of the line between consciousness and reality is nested within a tense, rollercoaster plotline following as a young English actor ensnared in a bewildering scandal with an enigmatic woman in early twentieth-century Vienna. Sophisticated, page-turning, and unforgettable, Boyd’s Waiting for Sunrise is a triumph of literary fiction from one of the most powerful, thought-provoking writers working today.