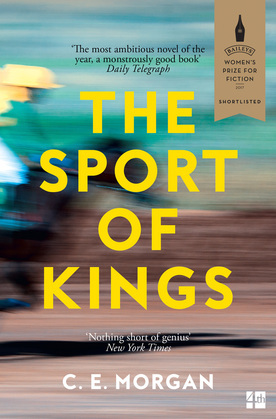 The Sport of Kings: Shortlisted for the Baileys Women’s Prize for Fiction 2017

“You take the risk,” Allmon said, “because a legacy is forever. They can take everything else away from you.”

Kentucky, 1950s. Henry Forge, heir to a family corn plantation in Kentucky is eager to prove himself different. Different from a distant, smothering, racist and violent father, a mute and deaf mother who does not love him enough to support him. Henry has no wish to grow corn. He wants to breed racehorses.

Henry in turns becomes a father and he names his daughter Henrietta, marking her as inextricably his. The girl’s mother divorces her father, leaving Henrietta alone with a racist father she grows to despise and the devastatingly uneasy years of adolescence that she has to navigate on her own.

Allmon Shaughnessy is the son of a poor and naïve black mother and an absent white father. He grows up poor and gets caught up in the violent world of the streets of Cincinnati, Ohio. When he is released from jail, he is hired as a groom by Henrietta, without her father’s assent. The three of them strive to mould Hellsmouth, the carefully crafted racing horse who carries their hope, into a champion.

C.E.Morgan’s writing is at times reminiscent of Faulkner, with the similar overarching story intertwining several generation, the theme of eugenics, the legacy of slavery and the burden of heredity and determinism made all the more preeminent by the horses. There is something devastatingly intimate about the portrayal of the numerous characters that make up this story, with their raw emotions and blazing ambitions.

The novel questions everything from race to social class, from gender to politic, sprawling over the years and interweaving multiple characters and narrators.